skip to main | skip to sidebar

wow...lauryn actually slept through the night which was a delight! she's such a stinker about eating dinner that i think she wakes up hungry so i usually get her some water or milk in the middle of the night. even though my sleep wasn't interrupted by lauryn, i did have a strange dream about getting 5 tattoos on one arm....

but back to the morning ~ when lauryn did awake at 6:00 i heard her call for me. i went to get her some milk & came back to find her face covered with her blanket. i said, "where's lauryn?" & she spooked me with "BOO!" i did my little fake scream & she said, "i scare you mommy?" then she drifted off for another hour.
btw, she gets this "boo" thing from isaac. he's been doing it forever, & we're not sure how it all started, but if you get him his drink before he has a chance to hide under his blanket, well....let's just say you learn to wait for him!

i was awake for good by then & headed out to the couch to check out the news. at 6:30 isaac comes stumbling toward me, squinting as he looks at me to tell me, "i slept really good last night". he pretty much forces himself awake the first chance he gets because he's so eager to start the day.
anyway, waking up to my kids everyday is a blessing!

just wanted to share a few things about isaac today:

1. yesterday a young fighter training in minot was sent here to train with dennis to get ready for his pro debut the end of october. this young boxer, mike, needed pillows & linens at the place he is staying so i took 2 of isaac's 4 pillows to send with him. since isaac was about 2 years old, he's been able to voice how he likes to sleep with his pillows stacked. if they are not, he'd tell you "they're too down".
so this morning isaac was in a very long phone conversation with his uncle when i heard him say that i'd taken some of his pillows to give to a friend, then his pillows were too down, & that is why he hadn't slept very well!

2. later today as we were leaving the gym, i asked isaac how the playroom was & who he played with. he told me he played with a boy who was 7 (that's a cool thing to do you know). i asked if he knew the boy's name. isaac replied, "evan, but i think his full name is kevin." it made me laugh, because i could argue with him all day & never be able to convince him that the boy's real name is evan.

3. isaac had gotten a yankees hat from a friend (because we would NEVER buy a yankees anything!) & decided that was the hat to wear today. when dennis noticed it, he gave him a hard time about it. isaac said he liked the hat, & dennis teasingly told him that he decides what team isaac likes. isaac was quiet for a few seconds & then strongly stated, "i can choose what i like myself." thatta boy!

p.s. dennis got up with the kids & got breakfast for them ~ whatta guy!

let me just warn you ahead of time that you may want to have a kleenex nearby...

today isaac went with dennis to work for a few hours. when they walked into the house isaac announced, "i've got a surprise for you!"

as i was going over to him, i noticed him holding a small box. i said, "what is it, a hamster?"

i was shocked to say the least. i coulnd't comprehend it at first. dennis explained to me that they found it along the side of a busy street. they picked it up & stopped at pet smart on the way home. they explained the situation to one of the employees who apparently didn't know much about a desert tortoise, but who just happened to be present as a customer in the store? a park ranger! she explained exactly what to do: what he should eat, what his habitat should be like, etc. dennis & isaac proceeded to buy the necessary items before heading home with their surprise.

now here is where you should have your kleenex ready...

as i was cleaning the tortoise's water dish, dennis said, "isaac, you better tell mommy what you named the tortoise."

i asked him why he chose that name & he told me, "because you miss your cousin tim who is in heaven."

tears sprang to my eyes as i tried to collect myself. dennis & i looked at each other, understanding how very special our little boy is to us.

my cousin tim passed away 5 years ago after suffering from cancer for too many years. the night before he passed was the night we found out that i was pregnant with isaac. isaac was born 2 months premature, a few days before tim's birthday. isaac was baptised 2 months later, on Easter weekend. tim also had been baptised on Easter. so even though isaac never got a chance to meet tim here on earth, i beleive they have some kind of connection.

meet the newest member of our family: TIM 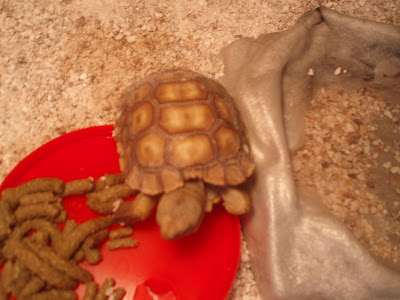 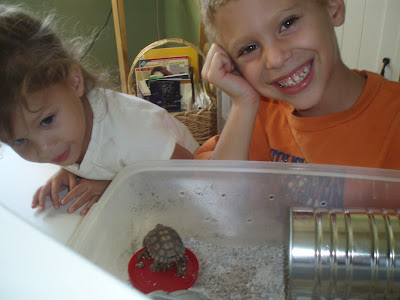 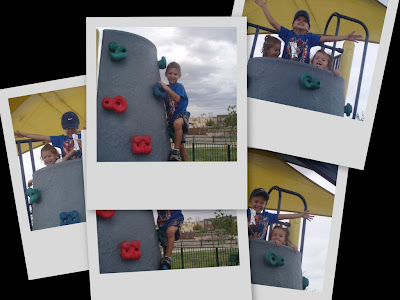 finally we have had cooler weather the past 2 days. that means we can finally enjoy the PARK again! so the last 2 days we've gone to a new park with friend jerolyn & her daughter ellie. isaac was disappointed when he found out that maggie & katie would at school, but he managed to still have fun. :) it's so nice that lauryn is getting big enough to use the equipment on her own & i don't have to be an inch away from her at all times. plus, ellie & lauryn actually really interact with each other. it's so cute!

BONUS: it's thundering right now as i'm writing this.......i'm THRILLED!!! it's been raining on & off this evening, with more rain on the agenda for tomorrow. i feel like i have to take it all in while i can because it never sticks around too long. .....bummer!

as a mother, you learn to pick & choose your battles. i've learned with lauryn that when she wants to dress herself, i just have to say "go ahead lauryn, knock yourself out" because, eventually, she'll call for "hep". i must say, her fashion sense is much better than my own though...guess i could learn a bit from my 22 month old! 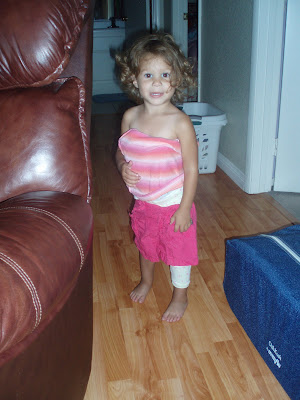 p.s. see the pajama bottoms peeking out of the shorts? :) 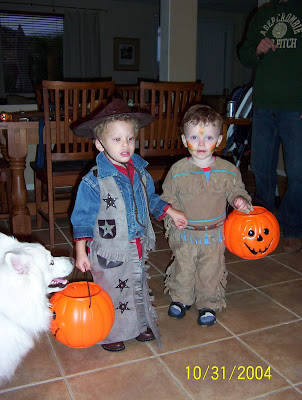 i found this photo of isaac & kole yesterday when i was going through some photos of the boys. i thought i hadn't dressed isaac in that denim jacket, but i guess i did for his 2nd halloween.
check out isaac's chaps...i remember looking at the photos that night after trick-or-treating and realizing that i had his chaps on the wrong legs. it's so nice that isaac hasn't yet figured out how much of a dork i am!

Posted by Allen Fieldhouse at 11:45 AM 2 comments 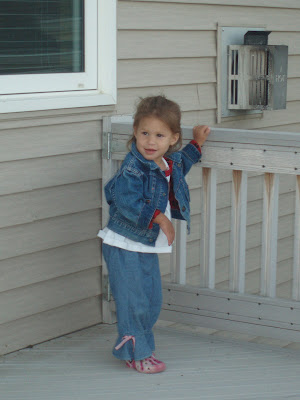 look at this cutie pie! this denim jacket was my mom's when she was a little girl, then it was mine, now it's lauryn's. it is lined w/ red & black plaid. it's soft & worn in, not stiff like many jean jackets can be. it is finally cooling off here so that lauryn can wear it for the fall. i love that she has something that has been handed down from generation to generation.

Posted by Allen Fieldhouse at 9:42 AM 6 comments

excuse me...what did you say? 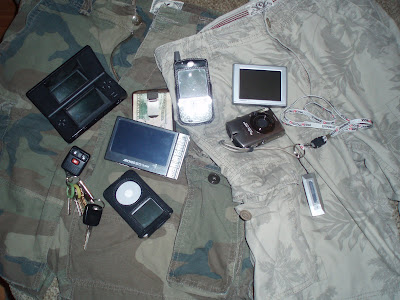 i imagine you're all wondering what the h#%@ this picture is about....well, let me take a few minutes to share the details.
you see, it started when my brother was a young boy. he has always been intrigued with gadgets. if he didn't have a gadget, he made one. you could always count on n8's room as being the abyss for duct tape, batteries, & missing pieces of something you're looking for. so now that he's all grown up... 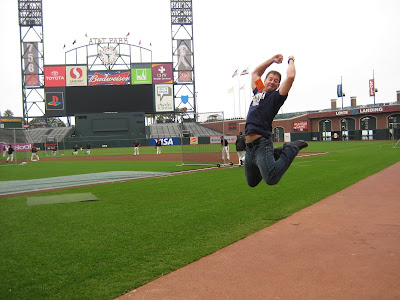 i mean mostly grown up, he has every gadget & then some, like his garmin gps & his archos thingy, which both, by the way, ROCK! i want, i want, i want so we were headed to the mall one day & i made a comment about how with his cell, wallet, & gps on him that day, he really needed those cargo shorts he was wearing. dee piped up & said, "yeah, he calls them his purse pants". i knew right then & there that was a blog post!

Posted by Allen Fieldhouse at 9:42 AM 3 comments

yippee! last night was date night. we got all ready to head to our destination:
the clark county library...

where my date got a kick out of this book:

our next stop was one of our favorite places... 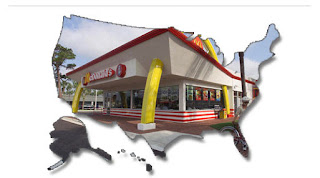 where an m&m mcflurry was on the menu.

the memorable evening was topped off with seeing the southwest shamu airplane decsending right above us as we were leaving mickey d's. how cool was that?

by the way, this was my date!

Posted by Allen Fieldhouse at 10:33 AM 3 comments

after the trip to san diego, g'pa had to leave the next day because he had to work. g'ma got to stay a few extra days to play with the kids. they had fun baking cookies, playing games, singing songs, horsin' around, & swimming.
check out lauryn's hair in the last photo
~freak of nature~ 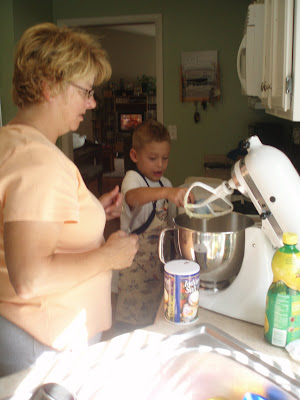 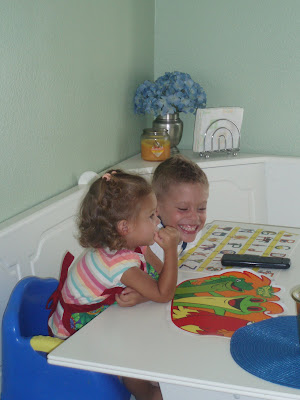 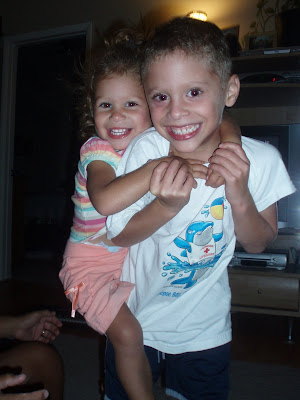 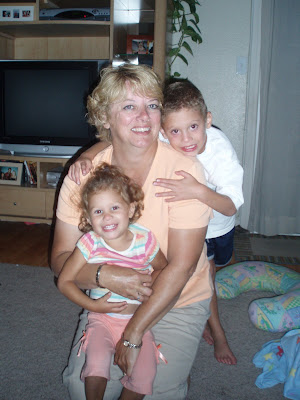 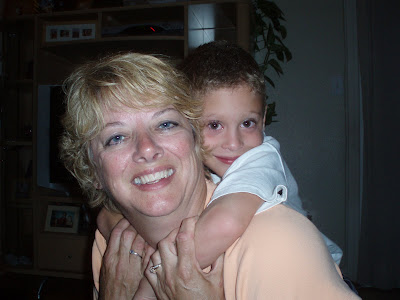 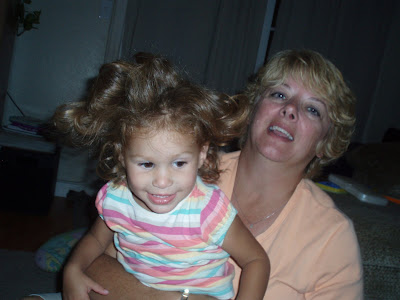 Posted by Allen Fieldhouse at 10:12 AM 3 comments 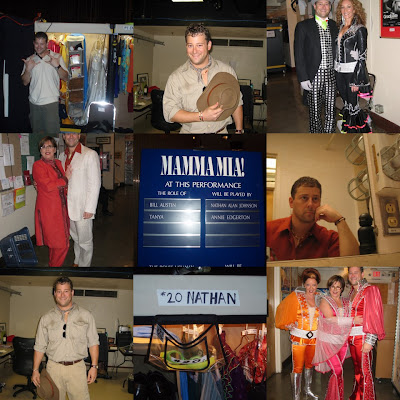 hi everyone....bet you thought we fell off the face of the earth. well, lucky for you, we didn't! :)
we had a great time in san diego. of course, the reason we went in the first place was to see my brother nate in the national tour of mamma mia! as luck would have it, a month before the shows in san diego, he found out that he would be one of the leads in the show that he is an understudy for. it couldn't have worked out any better because it was easy for mom & dad to fly here to las vegas & drive with us to s.d. also, my grandma joanne was visiting her cousin in s.d. at the same time (they had just gone to hawaii together) so it worked out for all of us to meet up there & to take in nate's show.
nate was excellent! he thrives on live performance & it is so fun to see him put so much energy into it. bill austin, the austrailian adventure writer, was the role that he was in, one of the "potential" fathers of sophie. the role doesn't really showcase his beautiful singing voice, but, nevertheless, it was sooooo enjoyable. we are so lucky to have had the opportunity to see him in that role. the show ends with the cast singing & dancing to a montage of the songs in the show. here comes nate out in this ridiculous get up & platforms. i about fell off my chair laughing. talk about entertaining!
nate gave us a backstage tour when the show was over. it was so neat to see how the show works behind the scenes. below in the collage is a picture of dennis & me on the stage. nate is usually part of the ensemble cast and talks about being behind "the wall" shown in that picture. we laughed when dee told us that many a night, nate comes from the show to tell her "guess what i heard behind the wall tonight". they talk, have a good time, some even are texting then, but when it's time to perform, they don't miss a beat. 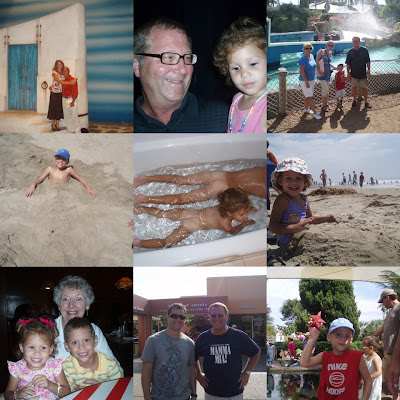 Posted by Allen Fieldhouse at 11:02 AM 2 comments 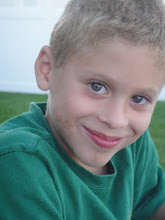 mmm...that was a good fudgesicle 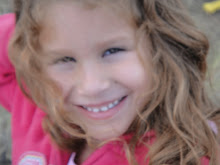